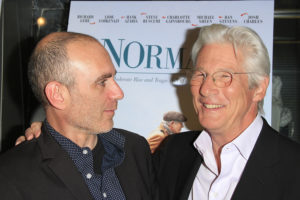 Richard Gere is one of America’s acting treasures. He has an uncanny knack for selecting scripts with the most interesting characters. Included in his vast body of films are, “Looking for Mr. Goodbar,” “Days of Heaven,” “American Gigolo, “An Officer and a Gentleman,” “The Cotton Club,” “Internal Affairs,” “Pretty Woman,” “Intersection,” “Primal Fear,” to “The Jackal,” “Runaway Bride,” “The Mothman Prophecies,” “Unfaithful,” “Chicago,” “Nights in Rodanthe,” and “The Second Best Exotic Marigold Hotel.” Gere lives in New York City where he has a teenage son, Homer James Jigme Gere, with his former wife actress Carey Lowell.

Joseph Cedar, writer and director of the critically acclaimed “Norman: The Moderate Rise and Tragic Fall of a New York Fixer,” was born in New York City and at age five, moved to Israel with his family where he was raised. He is an Orthodox Jew, served in the Israeli Army, and attended the Hebrew University in Jerusalem. Later, he enrolled in the Cinema Studies program at NYU’s Tisch School of the Arts. Cedar is Israel’s most celebrated, award-winning director and writer and is best known for “Footnote,” which received an Academy Award nomination for Best Foreign Language film and “Beaufort,” which won a Silver Bear Award at the Berlin International Film Festival and Israel’s Ophir Award for Best Director and Best Screenplay. He is married to Vered Kelner and lives in Israel.

Gere and Cedar recently sat down with a select group of journalists at the Beverly Wilshire Hotel to discuss their latest film, “Norman: The Moderate Rise and Tragic Fall of a new York Fixer,” where Gere  plays Norman Oppenheim, a hustler and dealmaker.

(The following has been edited for content and continuity for print purposes.) Is this hotel a little familiar?
Richard Gere: Everyone asks me that. I’ve never stayed here, honestly.

You could have fooled us. (Laughter)
Gere: The film was shot on a set. We did a shot of the lobby and the exterior, but that was it. They actually sell something in this hotel called “The Pretty Woman Experience.” I believe they have several suites that have been made to look like the movie.

You have been extraordinarily successful in your career, always choosing fabulous scripts with a very interesting cross section of characters. What attracted you to this script and to the character of Norman in particular?
Gere: Just as a piece of writing, it was brilliant. It’s goofy. It’s smart. It’s political. It’s personal. It’s generous. It has a thriller aspect to it. It has all those elements. As far as Norman, it was certainly a character I didn’t know, nor did I ever play it before. You live in New York so was there one particular Norman on which you based your character? Gere: Although I’ve known “Normans,” I didn’t know this particular Norman. But living in New York, and being in show business, “Normans” have crossed my path and I assume your world as well. There are “Normans” on the edge of powerful or financially extraordinary people and there those who want to get into those rarified worlds. For example, “Normans” can help you gain access to someone or something you need; an upgrade in a room, a better car, or he can get you a reservation because he knows the maitre de. It’s just a way to begin a relationship and make yourself needed. That’s ultimately what this Norman wants - what all “Normans” want – basically what we all want – to be needed.

What inspired you to write this brilliant script?
Cedar: I think I know many Normans and I think I’ve behaved like Norman a few times. (Gere leaves the table) Are you leaving? Are you coming back, that’s the question. (Laughter) (Gere returns with a beverage) Taking something from someone, knowing what he’ll expect is to be associated with you, you take what he’s offering because it’s helpful to you and you need it. That’s a small dilemma that I felt because I can’t solve it for myself – this combination of feeling gratitude towards someone who offered me something that I can’t refuse. The gratitude is real, but then I’m having a hard time because I don’t really understand why he made me need him. These are complicated things that the film helped me unravel.

Did you have to pursue Richard to do the role?
Gere: No, he didn’t have to. The synchronicity of how we met was kind of extraordinary. It was through a mutual friend Oren Moverman and it was at an event for new Academy members. My agent said they would really love you attend so the new members can meet you.

Cedar: Both Oren and I were new members that year and that’s why we were there.

Gere: Oren co-wrote one of my movies, “I’m Not There,” the Bob Dylan movie with Tom Hanks. So, we just started talking.

Cedar: If I’m not mistaken, you worked with him on “Time Out of Mind.”

Gere: That’s right. I was trying to write the script myself, but was having trouble finishing it. So, he ended up doing the rewrite and directed the film as well.

Cedar: In some ways these events are about “Norman”- type occurrences. You bring new Academy members to meet people like you so that things will happen and you need someone in the middle who will make those introductions – whether they take seven percent or not is another question. (Laughter) But, those connections result in movies. Did you have Richard in mind while you were writing the script?
Gere: Absolutely! (Laughter)

Cedar: I had Richard in mind since I can remember. (Laughter)

Many of us have not come across the narrative of the Court Jew. Could you kindly explain that?
Cedar: The term Court Jew is not something people think about excessively. The Court Jew has a certain personality, which is a combination of brilliance and flexibility, because otherwise, he is not essential to whoever has power. There’s another aspect that I think is extremely interesting. I think all of modern progress is the result of some Court Jew, at least in Europe. If you look at the great European monuments, none of them would have been possible without that relationship between a king, a duke, a prince, or someone in power, and a Jew who was able to provide the financing that was needed. Rulers needed that function in order to do things that in retrospect we are enjoying right now such as art, culture, architecture, and bridges. It’s a combination of things that are objectively good together, with others that are questionable such as armies and taxes, which the Court Jews thought were good but was seen as something bad by the people who had to pay them. However, 500 years later those taxes created beautiful cities.

Was there anything specific that you wanted to illuminate through the Norman theme in your script?
Cedar: I can only say that it was something that I was very attracted to in a very sincere way. It was not that I was looking for this tale.

Gere: Was it that the Court Jew would be the one to be sacrificed in the end – the easiest one to let go?

Cedar: I think that’s what makes this tale, this journey, this narrative so compelling. It’s kind of a cliffhanger because we don’t know what Norman is going to do in the end.

Gere: If you look at what was achieved for everyone, you can see that he found a way, kind of brilliantly, where everyone got what they wanted, including himself. He was essential.

Do you find that you are attracted to characters who are flawed?
Gere: Of course. The story of someone who is born a saint is really boring, but someone who was born to ordinary parents and then becomes Jesus Christ, that’s a much more interesting story. How would you describe your Norman?
Gere: I think there is a kind of purity. I haven’t found the right words to express what I’m feeling. I call him a holy idiot sometimes. Because of how he has controlled his emotions, there’s a kind of a mystical purity about him. Joseph keeps reminding me that Norman wants his seven percent for sure, but there is something about him, like Charlie Chaplin’s “Tramp,” that is extremely pure in these kinds of characters.

Gere: Just to pick up on that. That’s the key moment in the movie. But then in rehearsal we pushed it further. It wasn’t just buying him the shoes. I felt it was necessary to put the shoes on him. That wasn’t initially in the script, but I’m looking at it from the commitment from my character’s point of view, but Joseph is seeing it more from a narrative point of view. I had to put the shoes on the Israeli Deputy Prime Minister’s feet myself and that’s what cements the future relationship. How challenging was it for you to illuminate the different aspects of your complicated character?
Gere: Not so hard because he believes everything he says and does. When he’s lying he believes it. When he’s telling the truth he believes it. As soon as he makes something happens, he knows that he has to fix it. If someone confronts him, he makes up a story, but whatever the story is, once he starts it, his fantasy life is so vivid that he totally believes what he’s saying.

Norman could have been an unlikeable character, but I found myself rooting for him.

Gere: That’s the Charlie Chaplin part. In the end, he’s sweet. He’s not going to deliberately hurt anyone. There’s not a mean bone in his body. When he’s confronted by Steve Buscemi as Rabbi Blumenthal who asks him, ‘Why did you do this?’ I say ‘I don’t know.’ The fact was I was sorry. I didn’t intend to hurt anybody. This is the truth of where he’s coming from. None of his lies are meant to hurt anybody and he thinks all his schemes will come true. If everyone does what they’re suppose to do, everything is going to be fine.

“Norman: The Moderate Rise and Tragic Fall of a New York Fixer” stars Richard Gere and is written & directed by Joseph Cedar.