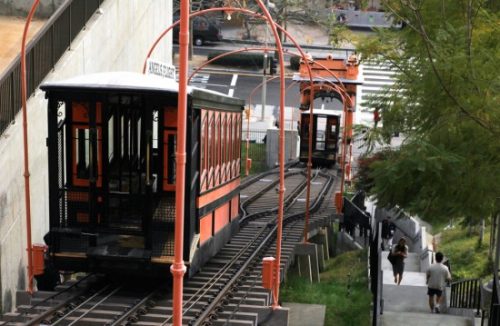 The historic Angels Flight railway in downtown Los Angeles, billed as the world’s shortest railway, will be reopened Thursday for the first time in four years.

Los Angeles Mayor Eric Garcetti announced in March that the iconic railway would undergo a renovation and reopen by Labor Day following its closure in 2013, when one of the two rail cars came off the tracks.

The reopening will be celebrated at 9:30 a.m. by members of the Angels Flight Friends & Neighbors Society, whose members plan to gather at the railway’s lower entrance at 351 S. Hill St.

The $5 million in renovations have been made through a partnership between the nonprofit Angels Flight Railway Foundation, ACS Infrastructure and the engineering firm Sener, which formed the Angeles Flight Development Co.

The Metro Board of Directors approved a motion by Garcetti in 2015 to study ways to reopen Angels Flight, which travels a short distance up and down steep Bunker Hill in Downtown Los Angeles.

The railway, which reopened in 1996 after being closed for three decades, has had a troubled history. No one was injured in the 2013 accident, but it did trigger its closure.

One person was killed in a 2001 accident that caused it to be closed for nine years. It reopened in 2010, but the CPUC shut it down for a month in 2012 over safety concerns, and it operated until it was closed again in 2013 following the minor accident.

Col. J.W. Eddy first opened a funicular rail up Bunker Hill on Dec. 31, 1901, when rides cost a penny. It was dismantled and put into storage in 1969 because of the Bunker Hill urban renewal project, then rebuilt and reopened in 1996, a half-block south of the original site. Travel with Teri B.: How to Navigate Global Entry vs. TSA PreCheck Who are you? Mystery mansion rattles neighbors