Ahhhhhh…. Schools almost out, no more homework to nag about, no more sporting events, rehearsals, or class gatherings to which we need to schlep the kids. That’s right—it’s summer vacation time!

A good friend of mine, Tom Nolan, the Crossroads School dean of students believes in keeping kids Broke, Busy, and Bushed—the Three B’s.

Nothing spells trouble like a kid with cash on his hands and nothing to do. Money gets spent on all kinds of things—most of them unnecessary and, sometimes, dangerous. Kids with cash tend to think they’re being adults by gambling, buying drugs, or flashing their wad around—none of which is behavior that any sane parent wants to see—so, being stingy with a buck is not only a good way to maintain close proximity with your child, it also gives us the opportunity to discuss spending and teach them the value of a dollar. As the expression goes, “If you want to recapture your youth, just cut off his allowance.” (Al Bernstein).

It’s funny, but I’d rather have my kid lie by a pool and take an occasional dip than have them indoors on a couch in the summertime. There’s plenty to do in the world—even if it means you have to drop them at the park, or drive them to the beach, or take them to the market with you. Sitting around is no way to spend a summer, and experience has taught me that once I got myself and my kids moving we were all a lot better for the experience—whether it was taking a hike, going whale watching (at 6 a.m.) or helping a friend with a construction project. Life offers plenty of opportunities for activity, and summer is the perfect time to be outdoors.

Remember that summer is also a time of growth. Your kid has just completed a year of school, they are moving forward, and that means they’re feeling older and more mature.

Let them tire themselves out. Summer is a time when many of us get to have our first “independent” experiences—like camping, pool parties, sleep-overs, or taking the bus to the beach (with friends). As parents we have to remember to give our children a little extra freedom so that they can have these special and unique experiences. Be careful not to dote on them in front of their friends (about pocket money or sunscreen)—they’re beginning to handle those issues themselves and it’s demeaning to treat them like you did when they were “little.” Our kids were all aware of their need for sunscreen, and there’s often someone around who has some just in case. A little sunburn is also a very good teacher.

My parents definitely allowed me more freedom in the summer. I could ride my bike to a far-off friend’s house, or stay late to have dinner with another family. These were important opportunities for me and I saw them as a reward for having successfully completed another year of school.

Not all school years were alike. Some summers were spent going to summer school. During those periods I would take a “make up” course as well as something frivolous—orchestra, weight lifting, etc. Nonetheless, for six weeks I heard about my friends who were going to the beach while I was still in school. Another valuable lesson that one learns during the summer.

Of course, with today’s technology, it’s easy for us to stay in touch with our kids. Basically, my wife and I had a rule about “checking in.” Our kids were asked to text us when they were leaving one location and when they arrived at the next. This way, we felt comfortable with their mobility and they complied in order to be allowed greater independence. This was a win-win for everyone—and it was something that didn’t require a lot of effort, didn’t embarrass the kids by being intrusive (they can text faster than the speed of light), and offered all of us peace of mind.

Of course, all of that activity hopefully leads to having a tired kid, and nothing is sweeter than the end of a summer day when energy ebbs and everyone relaxes. Ahhhhhh. As the parent of a couple of pre-teen kids, I once attended a rock concert with a friend. The show was really cooking, and as the band rocked on I noticed a particularly active 15-year-old girl dancing a few rows in front of us. I knew I had reached a tipping point, when I leaned over to my friend and said, “She’s gonna sleep really well tonight.”

Keep ’em Broke, Busy, and Bushed and everyone will have a GREAT summer.

Richard Greenberg is a father of four and the author of “Raising Children That Other People Like to be Around.” A native of Los Angeles, California, Richard graduated from UCLA with a Bachelor’s degree in English in 1976. Shortly thereafter, he married his childhood sweetheart JoAnn, and they continue to happily parent their four children. After more than thirty years working in the entertainment industry (as a post-production executive, editor and writer/producer), “Raising Children that Other People Like to Be Around” is his first book. You can read more of Richard’s parenting tips, tools, and triumphs on his blog, Common Sense Dad and on Facebook. 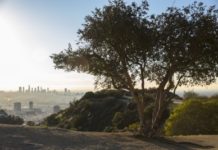 Here’s What Change of Seasons Looks Like In Los Angeles McDonald Workers in L.A., 9 Other Cities to Strike Tuesday

Here’s What Change of Seasons Looks Like In Los Angeles